We are a folk/rock band, influenced by traditional and modern music. We enjoy mixing the two to create our own distinctive sound, playing our own songs and our own versions of cover songs. There are five of us in the  band : Paul, Matthew, James, Sean and Daniel. We began playing music together about 7 years ago, just three of us: Paul, Matthew and James and we performed at occasional Charity gigs. Sean joined us about 5 years ago and Daniel joined 3 years ago. Since then we have played in a wide variety of gigs including corporate events, several T.V. appearances, BBC Radio/Mon FM/Highland Radio/National Irish Radio ‘RTE Rnag’, Festivals, commemorative events, National Award Ceremonies, weddings, fundraisers, hotels, clubs, pubs and many private celebrations. We have also extensively travelled with our music and have played all over Wales, Scotland, Ireland, England and in Canada.

We are born and bred in Holyhead, on ‘Holy Island’, which sits off the west coast of the Isle of Anglesey. We all speak Welsh and we perform in both Welsh and English.

We were approached by Sain Records to record two of our own songs which have been played on Radio Cymru, Radio Wales and Mon FM and on S4C.

We have been to Stiwdio Un recently to record three more of our own songs and hope to release these as soon as possible.We intend to get our first album recorded by the end of 2020. 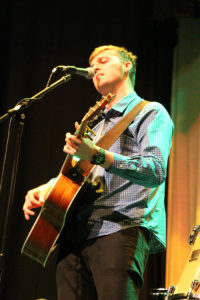 Paul is the band leader and plays lead guitar, violin, mandolin and the banjo and writes music. In gigs, he introduces the music and his brothers to the audience.

Paul is a keen Rugby Union and League player currently injured, was playing Union for Llangefni and League for Chester and North Wales. He’s a qualified coach and referee and loves all sports in general.

He enjoys listening to live music and his ambition is to continue writing and performing music, playing more and more of his own songs. 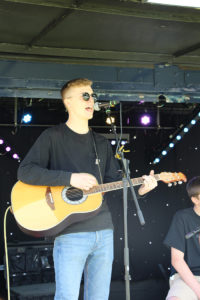 He also studied at Ysgol Gymraeg Morwsyn and Ysgol Uwchradd Bodedern. He then moved to Liverpool joining Liverpool University Architecture School to become a Chartered Architect – a 7 year course, currently he’s in his sixth year, starting his 2nd and final year of his Masters October 2020.

Matthew enjoys swimming, surfing, running, walking and playing squash. He loves the outdoors/beaches and mountain walking when he’s back home on Anglesey.

Because he’s based in Liverpool he’s not always available to perform with the band ,but really enjoys it when he can! Matthew particularly enjoys meeting lots  of interesting people from all over the world due to the variety of gigs and varied locations the band are asked to play.

He loves listening to live music and is looking forward to recording their first album. 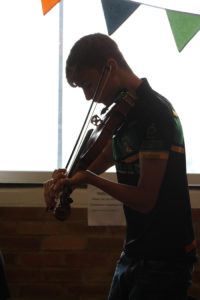 James is  still at High School and has attended the same schools as his big brothers!

His main instrument is the violin and he has passed Grade 8 with a Distinction. He plays the violin in the band but can also play the piano, mandolin and ukulele. He’s also a singer – helping out with the harmonies when performing.

James is  hoping to stay on at Sixth Form to study Maths and Science and would like to study Engineering in the future.

He enjoys sports -mainly football and rugby but he also likes to run and swim.

He enjoys performing in the band – particularly visiting all the different places they play and has made some good friends through performing.

James aims to continue playing violin and wants to experiment with other instruments to add a different  sound to some of our songs. 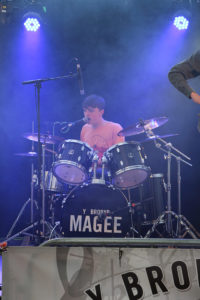 Sean is the percussionist of the band! He plays a range of drums, mainly a full drum kit, but also the Cahon, Bongos and Congos. He also plays the violin ;he is currently studying Grade 7 and plays the Irish whistle, trumpet and has started to play the electric guitar. He sings solos and harmonises with his brothers.

He attended the same schools as his elder brothers and is at High School.

Sean thoroughly enjoys playing rugby for Llangefni as well as the school team. He also enjoys basketball, swimming, cycling, sea fishing and music club at school [which is run by Paul!!].

He doesn’t know what he would like to do in the future – but hopefully something exciting!!

He enjoys performing with his brothers and loves visiting all the new places the band travels to. He especially enjoys playing at events where meals are included!!Sean takes a keen interest in food and cooking!

Sean hopes to continue to play the drums, violin and play more guitar in the future. He would also like to be involved with Paul in the writing of songs. 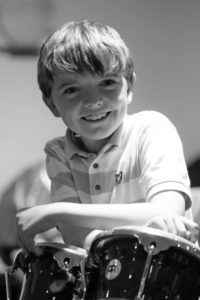 Daniel is the youngest member of the band.The violin is his first instrument; he’s currently preparing to take Grade 5  this year.He also plays the bass guitar, piano, Irish whistle, Cahon, bongos, tambourine and the trombone.He sings solos in gigs and harmonises with his brothers in most songs.

Daniel is in his first year in Bodedern secondary schooling really enjoying it . He enjoys taking part in all of the Urdd activities and is always very busy at Eisteddfod time.

He loves to swim-especially in the sea! and enjoys playing football, golf, running, and board games. He likes to watch movies and play games in his free time.

Daniel loves to perform with his brothers and enjoys visiting all the exciting places they are asked to play.

Daniel wants to continue playing the violin currently studying Grade 6, piano, whistle and percussion and would like to play the piano or keyboard in the band in the not too distant future.